The federal grants should help farmers and other activists like the good folks trying to save Monarch butterfly habitat at the Milwaukee County grounds... 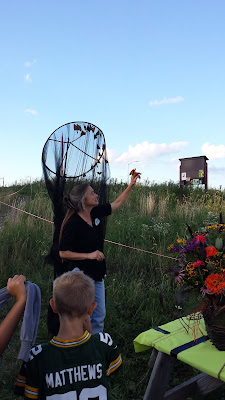 ...and get the Monarchs' sole food - - milkweed - - replanted in useful supply.

Everyone else: quit applying Roundup and other herbicides that are killing off milkweed, depleting the Monarchs' numbers and wrecking the bee population, too.


The State recognizes the importance of pollinators to our agriculture...
Next round of advocacy, get the State to add resources toward restoring pollinators!

1Relating to: proclaiming the third week of June as Pollinator Week.

2 Whereas, pollinators include birds, bats, butterflies, moths, flies, beetles,
3wasps, and most importantly, bees; and

4 Whereas, this diversity of pollinators is necessary for the maintenance of a
5healthy, diverse ecosystem; and

6 Whereas, pollinators have an essential role in agriculture in Wisconsin, and
7help to produce a robust food supply; and

8
Whereas, pollinators are responsible for pollinating nearly one-third of every 9bite of food individuals consume; and

10 Whereas, it is in the strong economic interest of agricultural producers and
11consumers in Wisconsin as well as in the United States to help ensure a hearty,
12sustainable pollinator population; and

13 Whereas, the honeybee is Wisconsin's state insect and plays a significant role
14in pollination in the state; and

3
Whereas, Pollinator Week recognizes the partnership role that pollinators play 4in agriculture and stable ecosystems, and increases awareness about the important
5role of pollinators; now, therefore, be it

6Resolved by the senate, the assembly concurring, That the members of the
7Wisconsin legislature proclaim the third week of June as Pollinator Week in
8Wisconsin and commend this observance to all residents.