We are told that Wisconsin's infrastructure gets a grade of "C."

Which actually surprised me, since the previous Governor a) so repeatedly starved road repair budgets while b) short-changing or outright c) killing transit that could have reduced highway wear-and-tear that he earned him a politically-embarrassing "Scottholes" billboards, TV spots and other negative, statewide attention.

Which arguably contributed to his 2018 defeat (as did with the multi-billion-dollar Foxconn fiasco).

Which itself included its own quarter-billion+ in wasted new highway lane construction which Walker funded in part with millions of dollars ticketed for pressing road needs statewide that were deliberately sacrificed:

“Therefore, the use of state highway rehabilitation funding to complete this work near the Foxconn site would likely result in the delay of other, previously planned rehabilitation projects on state highways,” [fiscal bureau analyst John] Wilson-Tepeli wrote.

And I have not been shy about calling out the Evers administration when it imitates the worst of Walker's road-building excesses. This is not what voters were hoping for when they voted Walker out.

I will include a few grafs from a summary, 2018 item below which includes multiple links that puts the blame squarely where it belongs.

And don't forget that Republicans intentionally hamstring and degrade the public sector - whether it's education, science, roads, environmental protection or public health -  because GOP ideology with its emphasis on private sector control requires governments and the cities in which most people live struggle to provide services for the people.

Lest Ronald Reagan be proven wrong when he said 'government is the problem.'

A particularly tough winter has battered the pavement, motorists' nerves and wallets. Potholes, everywhere, with some worthy of building permits and environmental impact statements, but has the state, awash in surplus dollars, directed added funding to local street repair budgets that have been getting routine, budget-season reductions?

Even in a $43 million supplement of highway spending?

The Government/Road-builder Complex run out of the State Capitol, and in satellite offices in nearby trade associations and lobbying shops, has chosen instead to pour extra millions of our tax dollars into more new lanes - - big-dollar projects that will, after a freeze-thaw cycle or two acquire their own axle-breaking-tire-popping cracks, splits and degradation.

Why not fix what we have first?

Because there are bigger profits to pocket and ribbons to cut and news releases to Tweet when adding new lanes than fixing the cracks and holes with lower-profit asphalt.

We've noted on this blog here, and here the degradation of local roads as Walker's budgets starve municipalities of revenue, but yesterday on a warm, but by no means blistering spring day on the regional 'freeway' system north of Milwaukee built and maintained by the state, there were monster potholes damaging vehicles and shutting down traffic that were monsters....

Walker keeps talking about exporting his model and methods nationally. With Wisconsin's roads falling to third-worst among the 50 states, you might want to boost your auto insurance before heading to the polls:

The numbers mark a dramatic decline in road quality. As recently as 11 years ago, Wisconsin's roads ranked No. 22 in the nation, and their deterioration affects almost every industry and motorist in the state, according to the study commissioned by the Local Government of Wisconsin Institute.
Poor roads in the Milwaukee area cost drivers $700 a year in extra vehicle repairs, according to the study; in the Madison area, road conditions cost drivers an additional $615 in annual tire wear, maintenance and accelerated deterioration. Nationally, substandard road conditions cost drivers an average of $377 per year, the study found.

The primary culprit: State budget cuts that have slashed the amount of money dedicated to repairing both state highways and local roads, which has left fewer than half of Wisconsin's roads rated as "good" or better, the report found. 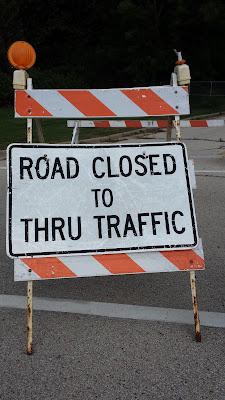 Yet while the state keeps building politically-enabled and pricey new lanes and wider ramps - - have you recently driven through the perpetual $1.9 billion 'improvement' to I-94 from Milwaukee to the Illinois border, or the $1.7 billion Zoo Interchange battle zone? - -  the condition of Wisconsin's roads are now rated third-worst in the nation, data show.

So how telling was it yesterday that busy State Highway 45 north of its connection to the Zoo morass was closed for hours because huge potholes had opened up on the pavement.

The road-builders make a lot more profit laying concrete than they earn filling potholes and repairing existing roads, so our infrastructure continues to deteriorate while Walker and WisDOT are  throwing billions into the SE WI 'freeway' system  - - as seniors and millenials drive less.

For Foxconn, Team GOP bets your farm, breaks you bank(s)

Note, however, that Walker tossed 250 million borrowed dollars into the $3 billion deal for Foxconn via the state budget whenever its approved to hurriedly complete the over-built, under-funded reconstruction and expansion of I-94 though Racine and Kenosha Counties which Vos had been demanding even before Foxconn made the news.

Two things about a quarter of a billion dollars which Walker is treating like campaign support Kohl's cash:

*  Is $250 million in dedicated borrowing for highway work right through portions of Vos' district enough of a concession to get him off Walker's back; Walker will never budge off the no-new taxes bumper sticker he needs to frame his '18 re-election campaign, so maybe it's time for Vos to to take the $250 million bouquet and live with being another modern Wisconsin borrow-and-spend Republican.

*  $250 million could have filled most or all potholes on our state's rutted and poorly-ranked roads, which is why it would be useful to ask the good people of cash-strapped Northfield, Wisconsin across the state from Vos' district where the main road has crumbled back to gravel:

Communities Feel The Pinch Of Construction Costs And Budget Cuts

Governor Pothole. Hadn't heard that one. Love it.