There has been a devastating report about racism left unaddressed by officials within the Burlington, WI school system.

An earlier report about racial hostilities in the Burlington school system had made national news, too, when a Racine elementary school teacher's lesson plan after the shooting of Jacob Blake in nearby Kenosha sparked an ugly reaction:

Melissa Statz developed a lesson for the next day that included a children's book, a worksheet and an educational video. She told CNN the students seemed interested in the lesson.

The lesson, which discussed systemic racism and the Black Lives Matter movement, sparked outrage in Burlington and the backlash was swift as first reported by NBC. Angry parents began calling for the teacher's resignation. They accused her of "indoctrinating" children and a Facebook group titled "Parents Against Rogue Teachers" was formed.

The anger eventually came to the fore at a fiery school board meeting. Days later, police investigated two acts of vandalism involving the N-word at two local schools, including Cooper Elementary.

So, I'm wondering if there will be any reaction from WI GOP Assembly Speaker Robin Vos - 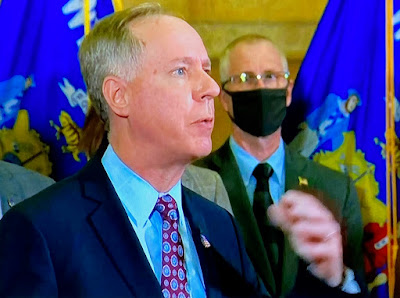 - surely the state's most influential born-and-bred-Burlingtonian - details here - and who says he "strives to make life better for the residents of Racine County."

And because he said last fall people should re-elect him because, among other things:

...I will continue to fight for them by working for better health care, excellent schools, and a strong economy so that every family can make their dreams come true.

One of the most influential lawmakers over the state budgeting process said he wouldn't support increasing funding for the state education agency because its new leader elected Tuesday was heavily backed by Democrats and teachers unions.

Vos isn't shy about meddling in educational matters statewide, and for the most vindictive and partisan reasons, but wouldn't it be better if he looked at the schools in his own district and made fixing them for residents there a priority.

I can imagine someone like Tommy Thompson getting involved in a similar situation about 20 seconds after this kind of damaging and unacceptable news about local schools hit the media.

Oh - and about that Vos pledge to fight for "better health care?"

Again, his rhetoric again does not line up with the facts, and Wisconsin citizens will suffer: