A census of ghouls, fools and tools

Some of the 2020 Census data is out, and Wisconsin retains its eight US House seats, and with two Senators, 10 electoral votes.

Remember that this is the Census which the defeated administration repeatedly tried to skew against big cities like Milwaukee with their immigrant - and legally countable - populations, so I expect we will see in subsequent data releases an official loss of population in Milwaukee which surely be an undercount.

I have some familiarity with the census procedures, having served during the Norquist years as the city's 1996 census liaison, and I know that even in the best of times (thus not with the Stephen Miller/White House-led campaign of anti-immigrant intimidation) there is understandable reluctance in neighborhoods and households with undocumented residents to open doors and speak with government officials who want to and can only legally count people, not turn them in to law enforcement.

But Wisconsin's census-related political problem with the number of Congressional seats we have - other than the overall transfer of power to the GOP-dominated south and West that strengthens an already-unfair and disproportionate Electoral College edge with it - has less with what we have and more to do what we do with them, and in particular with how heavily gerrymandered Republican incumbents abuse and devalue the majority of seats they've latched onto.

And these Three Fools and a Tool have had themselves quite a month of April - heaping on top of its long-acknowledged cruelty a toxic layer of cringe-worthy stupidity not seen in Wisconsin since Joe McCarthy showed the nation that indeed he had 'no sense of decency.'

Some April 2021 lowlights from the Three Fools:

* And then there's the [Russian] tool - Ron Johnson, who also had himself a high-profile and even more highly-embarrassing April. 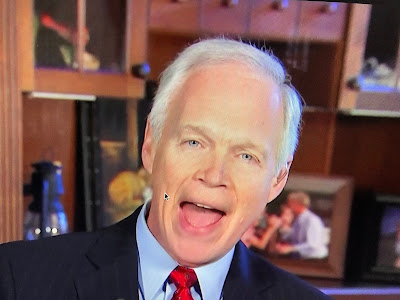 Ron Johnson's new embrace of 7,400 COVID is nothing new

Because, remember: He even considered the deaths of 11 million Americans from COVID19 as an acceptable price for others to pay.

GOP Senator Upbeat Coronavirus May Kill ‘No More Than 3.4 Percent of Our Population’

* And there's this one leading the Wisconsin State Assembly who displays elements of his more senior party leaders, so could easily blend in if he took a promotion to Congress as have The Fools: