The Glenbeulah oracle adds rap & dance to his expansive canon

You've probably heard by now that GOP WI House member and Grammy Awards devotee Glenn Grothman has accused popular rapper Cardi B of contributing to the decline of American culture.

U.S. Rep. Glenn Grothman, a Republican from Glenbeulah, said on the House floor Thursday that rapper Cardi B's appearance at the Grammy Awards earlier this year was "inconsistent with basic decency" in a speech urging the Federal Communications Commission to ban performances like hers....

Cardi B, who won a Grammy Award in 2019 for best rap album, told her 17.9 million Twitter followers that Grothman should worry about more pressing issues facing the country.

But before you denounce Grothman as some sort of ignorant, intolerant and small-minded misogynist, you might want to review other weighty matters - like geology, ophiology, the American family, African-American culture, single-parenting, and the War on Men - which Grothman has analyzed and addressed openly to better appreciate his mind and heart, including:

Kwanzaa is bad and survey research proves it

The Black family, and more

'Gals' have schemes, and more (video) 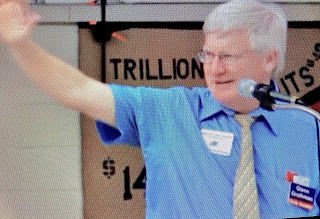 The War on Men will destroy America, and more

Unfortunately, this moron does represent the majority view in Wisconsin's 6th district. That's why he keeps getting reelected.

Let's not forget that the gerrymander his party has embedded gives him a guaranteed cushion that makes defeating him extra-difficult.