On Earth Day 2021, Milwaukee River revival is a model win

shows that committed public agencies and tireless grassroots organizations can give the people and the environment alternatives to thoughtless, self-defeating waterway abuse.

I remember that Milwaukee Mayor John Norquist was already pushing for the removal of the North Ave. dam when I went to work for him in the late 1990's; when the dam was finally taken out the river again could support a salmon run and an abundance of other species, as the WI DNR later reported.

Years later, the celebrated removal of the Estabrook dam further upstream after years of agitation by Milwaukee Riverkeeper and other groups is helping a Sturgeon revival in the river.

Sturgeon were native to the Milwaukee River but were wiped out in the 1800s by pollution, habitat destruction and the building of dams that prohibited their movements upstream.

The large, ancient fish have only recently started to show up in the Milwaukee River due to sturgeon reintroduction efforts in the watershed.

And when I swung by the river Monday, I loved seeing this relatively new sign (and all the anglers, too): 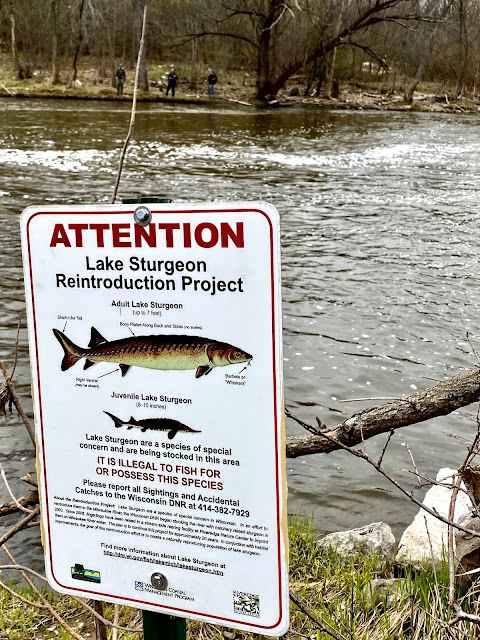 Everyone and everything wants, needs and deserves clean, fresh water; the progress made in the Milwaukee River corridor and the networks it connects with are big, sustainable wins for the watershed and the state.

We know that pollution, climate change, funding shortfalls and special interest and even partisan obstruction remain barriers statewide that demand our attention, but as Earth Day 2021 gets underway we can honor the good work that so many people do everyday.

Hallelujah!! And with the clean up & restoration of not only sturgeon but other fish as well I have seen a few reports of sightings of Bald Eagles!!