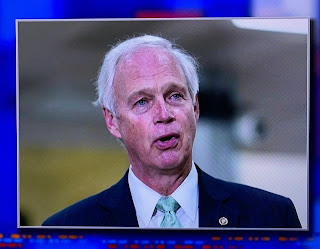 While his statement contained predictable, partisan boilerplate doomsday hits about ruinous change policies  Biden is allegedly foisting on the country, Johnson went on to suggest that Biden doesn't "truly love" - or even like America the way Johnson and his followers do.

Setting aside that Johnson's oddly angst-ridden existential question - "Can anyone even like, much less love something they want to fundamentally transform?" - is what a hapless George Costanza would have asked of Jerry on "Seinfeld" after yet another breakup, please remember:

The last time we heard Johnson talking about "people that love this country" he was excusing people who were involved in trying violently overturn the Presidential election:

“Even though those thousands of people that were marching to the Capitol were trying to pressure people like me to vote the way they wanted me to vote, I knew those were people that love this country, that truly respect law enforcement, would never do anything to break the law, and so I wasn't concerned,” Johnson (R-Wis.) said in an interview on conservative radio host Joe Pag’s show Thursday.

I'd also add that any politician who 'truly loved' people and the country wouldn't have declared that 11 million COVID19 deaths in the US was OK, and would not have his influence to repeatedly undermine the value of  pandemic-stemming vaccines, as has Johnson, here.

The Giuliani mess has resurrected news stories from last August about Johnson receiving a FBI warning in an effort to alert congress members and conservative news media outlet One America News that they were at risk of being a prop for Russia attempts to influence the outcome of the election. One can only hope that AG Garland & Co. will pull enough threads to also truss RoJo up like a Thanksgiving turkey.

Will someone please start a #ronjohnsovitch hashtag?