Robin Vos is having himself a signature (dooms) day

The GOP-led WI Legislature should just declare Friday, January 28th "Robin Vos Doomsday" throughout the land, as no Assembly Speaker will ever lay claim to having spread so much ill wind and literal illness statewide in a 24-hour period, by:

* Pushing across the finish line an end to the Governor's statewide masking order while the COVID19 pandemic is still spreading, and; 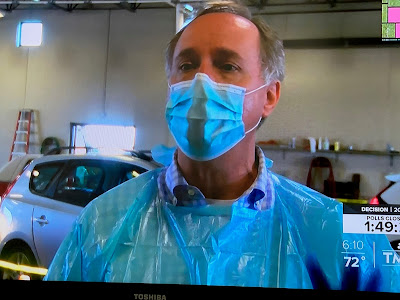 WI GOP Assembly Speaker Robin Vos in protective equipment while claiming in April that it was "incredibly safe" to go out into the pandemic and cast an in-person April election ballot.

* Appointing himself to WEDC, the state development agency board, which is trying to salvage something from the failing Foxconn fiasco which Vos, Walker et al foisted on taxpayers for partisan purposes, and;

* Now being able to keep a closer eye on a few things, as I noted a couple of years ago:

WI GOP Assembly Speaker Robin Vos managed in a state without two spare potholes-filling nickels to rub together to steer to and through his district a quarter of a billion federal and state road-and-interchange widening dollars that will trigger sprawl beyond bulldozed Mount Pleasant farms even if Foxconn never diverts a gallon of Lake Michigan water to produce a single big screen LCD TV. 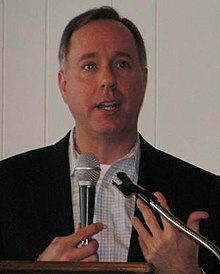 Look at it as an adjunct to the gerrymandering Vos helped create that serves his own interests - - interests his caucus wants to protect through litigation, voter suppression and power-grabbing lame-duck legislating.

* Using his taxpayer-paid perch to help rewrite completely the entire Foxconn fiasco with statements like these:

“I strongly supported getting rid of the old Department of Commerce and creating a new and more nimble economic development agency, that’s what WEDC is, and I want to make sure it stays that way and does not become a political operation with different values than we had when the bill was originally passed....”

“I think we need to do everything we can to make sure it’s successful so that the folks that I represent don’t end up, because of the actions of the governor or the WEDC, getting stuck with the bill,” Vos said.

And by "Governor,' Vos means Evers, though the record shows he should have said "Walker," as Bruce Murphy so succinctly put it, here:

Gov. Scott Walker promised billions to get a Foxconn factory, but now he’s running away from it

* And, finally, proving that the Wisconsin gerrymander receiving national attention which has allowed dim bulbs like Fitzgerald, Tiffany and Grothman to shine in Congress while giving Vos power statewide beyond a modicum of rationality or fair play is a permanent obstruction to Wisconsin ever recovering its long-lost progressive heritage.

Which was the plan which began with Walker's corporately-driven ascension, has deeply strengthened the right's strong ideological grip statewide and now is producing Vos's permanent, pandemic-heightened malfeasance.