The City of Sheboygan, having annexed the site in a power move to box out opposition in the neighboring Town of Wilson, gave a preliminary permit approval Tuesday evening which could lead to the construction of an upscale golfing complex in a pristine, heavily-wooded nature preserve on the Lake Michigan shoreline that will also take acreage in the adjoining Kohler Andrae State Park.

Ongoing litigation prevents the immediate use of the permit.

Here are items for your review:

* There are years of posts and links at the website of Friends of the Black River Forest, the grassroots organization doing battle for political fairness, conservation, environmental justice and the broad public interest.

* I have posted about this project often - here, for example -

Few projects with the exception of Foxconn which have had the blessing of Walker's 'chamber of commerce mentality DNR and other taxpayer-funded public agencies - - the AG's office, the Wisconsin Natural Resources Board, which is supposed to give independent oversight guidance to the DNR, local officials and annexation officials at the state DOA - - have outweighed the state's disregard for the environment and fair play more than the golf course proposed adjacent to and grabbing acreage inside a popular state park...

* Here is a more recent item, with a view of some of the actual state park land ticketed for bulldozing and private construction - 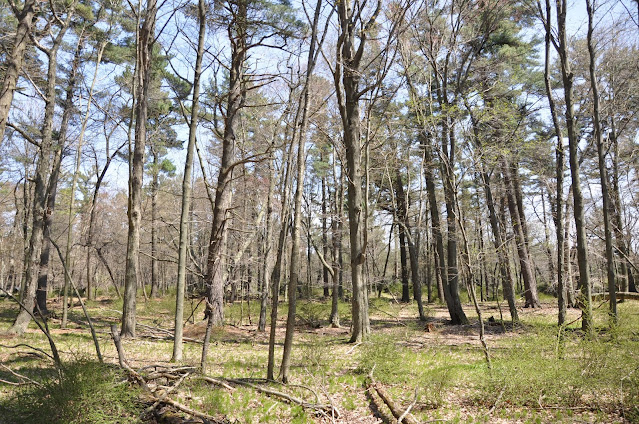 * And another post which included sections of the project's environmental impact statement which detailed the harm in store for wetlands, woodlands, dunes, and wildlife habitat.

A further mind-boggling insult is that the Wisconsin DNR remains joined with the developer in a lawsuit that seeks to bar citizens (opponents of the plan have created "Friends of the Black River Forest"- FBRF) from challenging the land:

So basically the state - that's the people, you and I - is arguing that the people can be barred from contesting the disposition of public land which is there for the people's use -  than 400,000 annually, according to recent DNR records - and which, in this case, is park land literally within a stone's throw of the people who have filed a legal contest.

The bigger picture and baffling disappointment is that this entire matter and the way it has been moved along has not been a bigger issue statewide.

To be clear, this is not an isolated local matter.

What is happening is that taxpayers who have already paid for local and state government operations are with their own time and money trying to force governments to do their most fundamental jobs, and about which there should not be this kind of dismissive and discriminatory second billing to taxpayers:

1. Protecting the people’s rights to water, park land and wildlife - all of which are in the public domain.

2. Providing governance that puts the public interest and opportunities for all people ahead of catering to the already-privileged, as I noted in earlier posts:

...the Natural Resources Board is working towards redoing the master plan for Kohler Andrae State Park to accommodate the proposed golf course, including land transfers, road-building, traffic access, etc.

But that wasn't really the beginning of what I've called on this blog the DNR's smoothing of the proposal for its eventual permitting and construction.

*  Working your way through the DNR web page, you will find this link to a pdf file containing substantial email traffic among numerous DNR officials and staffers about the project dating to March, 2014 - - including agency review of an earlier Kohler development since abandoned involving the same company and dating to 2011.

On page two, you will see Kurt Thiede, then a DNR manager who is moving to the US EPA regional office in Chicago as Deputy Administrator to his former DNR boss, Cathy Stepp, asking DNR staff for maps and design suggestions for locating a golf course building within the adjoining state park.

On page 50 of the pdf file, a Kohler representative asks Walker for his assistance obtaining for the project some so-called "innocuous" acreage in the adjoining state park.

Consider the power imbalances in that battle with the well-connected industrialist and golf course magnate Herbert Kohler:

Kohler is asking the DNR for an easement of 3.8 acres for its golf course operations. The company had sought as much as 20 acres from adjoining Kohler-Andrae State Park. An early version of the course showed that Kohler wanted to build several holes on state park land...

Kohler, a financial supporter of Republican Gov. Scott Walker, spoke with staff from the governor's office, the DNR and the Department of Administration in late April about the easement, Walker's spokeswoman, Jocelyn Webster, said in an email.

Between 2009 and 2013, Kohler Co. employees contributed $42,254 to Walker's campaign fund, according to the Wisconsin Democracy Campaign, which tracks political donations. Nearly all of that amount was directly from Herbert Kohler.

*  Note also that the Wisconsin Department of Administration helped the company quickly win the annexation of the project site to the City of Sheboygan, so add the DOA to the DNR and the National Resources Board to the roll call of state agencies facilitating the project.

Think about all the hours of public employee time committed by the DNR, the Natural Resources Board, the DOA and the Governor's Office to getting one private business's plan for a privately-owned golf course aimed at upscale users through permitting and construction.

I'll bet the cost in public dollars could have funded some real progress towards perhaps cleaning up some of the many, multiplying waterways added to the impaired list on Walker's watch.

So, ask yourselves - if the Sheboygan construction permit is implemented:

* Which state park is next for disassembling to serve a private business that will provide recreational opportunities which are out of the reach of everyday Wisconsin taxpayers, especially minorities whose incomes lag behind white residents, according to this June, 2020 report?

Adding one more log into a bonfire of evidence about racial inequity in Wisconsin, the state's economy ranked last in racial equality among all 50 U.S. states, according to a new study of wealth and employment gaps between Black and white residents.

* How many Wisconsin citizens will be locked on the outside looking in while government caters to those who already have a disproportionate share of wealth, power and access to public sector resources and decision-making before people demand fundamental change to the way Wisconsin continues to be run?

* A better way to say it is: how many Wisconsin citizens will it take to grasp what minorities have long had to deal with before fairness and equities are the rule -and not litigated, grudging exceptions like this one that tireless advocacy for transit options forced on government that routinely does not share resources and opportunities equally:

The terms of the settlement were negotiated in court-sponsored mediation. The suit was filed in 2012 by Black Health Coalition of Wisconsin and the Milwaukee Inner-city Congregations Allied for Hope.

Thank you James for following and reporting on this story over the years. Why don't the people of this state see what rich republicans are doing to hold onto power and economic advantage, trampling on the rights of the average Wisconsin taxpayer and totally ignoring the rights of the poor.