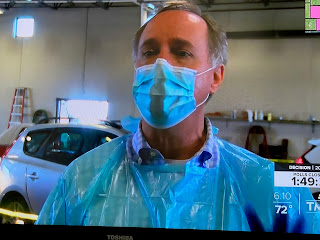 - that it was "incredibly safe" to go outside.

Want to know how incredibly bad a forecast that was?

The New York Times is currently reporting below that Wisconsin has totaled more than a half-million positive COVID19 cases, and more than 99% have been reported since Vos made his incredibly dumb declaration.

Regardless, Wisconsin became a so-called hotspot for the disease this fall and both the Times and state COVIF19 totals represent enormous suffering.

No wonder Vos won't really engage with Gov. Evers at this very late date on an action plan to fight the virus.

It's probably too embarrassing since we're approaching  one-in-ten Wisconsinites among our 5.8 million people having been infected by COVIF19, and experts have said the spread of the disease extends well beyond reported cases:

The undercount is a result of inconsistent protocols, limited resources and a patchwork of decision making from one state or county to the next.

*Note: COVID case tracking data and reporting varies by organization. Variances are due to differences in methodology, time of day and other factors.

COVID tallies reported by the Times are based on data supplied by Johns Hopkins University and The COVID Tracking Project, among other sources,.and are usually higher than those reported by the state.

Vos might be one of what the Canadians call a hoser said...