There is much COVID death in Wisconsin, but irony might be alive here yet

Yes, Bucky, a politically-powered pandemic has visited death by the thousands upon Wisconsin this year. Look at the most recent, shocking daily numbers posted for the state by The New York Times. 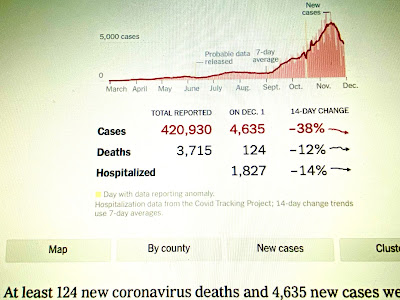 Yet amid all the disease and dying we can report that it appears that irony is still alive, even in the same Republican led-Legislature which kept its members healthy during this grim year by socially-distancing themselves from COVID accountability while on taxpayer-paid vacation since mid-April.

LeMahieu, perhaps lacking Vos's breezy word-smithing and media-attuned Internet savvy didn't dress up his dismissiveness with as nifty a flourish, but his blunt words conveyed the same impact - at least through the end of the year.

"We’re not coming back in December,” said Sen. Devin LeMahieu, who takes over as majority leader in January.

Meanwhile, people are dying from COVID19 in Wisconsin by fresh dozens and scores every day.

Thus some questions emerge, since COVID doesn't go on vacation because the Sen. LeMahieu keeps it home and there are hellacious predictions from those pesky experts - Fauci! - US may see ‘surge upon surge’ of virus in weeks ahead - about what's coming as winter locks itself in.

Might that be just the incentive these 'leaders' have needed to get them busy doing their jobs?

2. Or is this what newsroom wags used to call 'synthetic conflict,' since neither has done anything since April to coordinate with Evers and get serious about battling the pandemic.

3. And when will there be clarity on Questions 1 and 2?

Time, and a body count which includes nearly 500 dead Wisconsinites in just the last 11 days will tell.

Two farts in the wind. All bluster. No substance. An embarrassment to Wisconsin, democracy, & humanity.