From mascots to redistricting, Walkerism is the regressive force

The good news is that high-profile professional sports' teams are finally abandoning their racist appropriation of Native American images for nicknames and logos to help sell hats.

The bad news is these offensive practices will linger in Wisconsin because rightwing politicians who cling to a discredited past intentionally threw fresh barriers in the way of progress seven years ago just this past weekend.

And it is no surprise that along with other missed opportunities  - from cleaner rail transit to greener, renewable energy to medical services for women and low-income citizens - it was the regressive and repressive hand of Scott Walker that directed state power to put people down and keep the state stalled and sidelined.

“Sadly, racially based mascots remain an unhealed wound for countless Native Americans who endure being portrayed as something less than human,” said Joseph Wildcat Sr., president of the Lac du Flambeau Band of Lake Superior Chippewa Indians. “Any and all Native mascots, regardless of intent, portray us as sub-human.”

The Wisconsin Indian Education Association mascot and logo task force reports that 65 Wisconsin high schools had once used a race-based "Indian” sports team identity, but that number has been reduced to 28 school districts over the years.

And don't forget that Walker 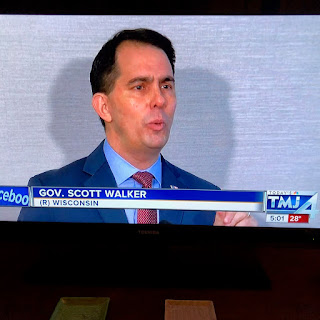 privately signed the bill which hardened the misuse by taxpayer-paid public institutions of Native American names and images.

“Gov. Walker showed great leadership by indicating his personal preferences on this matter would not supersede the input from all interested parties,” Nass said. “Even though he will sign AB 297 into law, he is providing moral direction to all sides to achieve greater understanding and more dialogue in a less confrontational manner.”

Walker, a Republican, signed the measure privately Thursday afternoon. He released a statement saying he's worried current law infringes on free speech. A person's right to speak doesn't end just because what they say is offensive, he said. The best approach is to educate people about how some phrases and symbols are offensive when used as nicknames and mascots, he added. -

about the nasty 1950's miasma that keeps Republicans privileged and empowered through donor-enhanced gerrymandering which the GOP is already litigating to enforce for at least another decade:

The move [June 3rd] Wednesday was brought by former Assembly Speaker Scott Jensen with the help of the conservative Wisconsin Institute for Law & Liberty. It seeks to put in place new rules to try to ensure the state Supreme Court — instead of a federal court — decides any redistricting litigation.

Both sides believe that would favor Republicans because conservatives control the Wisconsin Supreme Court.