I have noted the reflexive and uncaring accusations towards poor, out-of-luck, and powerless citizens which subsidy-laden and professional ingrates like Republicans Scott Walker, Glenn Grothman & Paul Ryan -

and others regularly throw out to manipulate the basest of their base supporters.

In the final month and a half of the campaign, Gov. Scott Walker is making a blunt promise to voters — that he'll ensure jobless workers aren't on drugs, or their recliners."My belief is we shouldn't be paying for them to sit on the couch, watching TV or playing Xbox," Walker told cheering Republican campaign volunteers last week in West Bend.

- with an unimaginative and unattributed update of his own his week:

Sen. Ron Johnson (R-WI): “The Federal Government Has Subsidized Sitting On Your Couch”

The context for Johnson's nastiness is a worker shortage he attributes 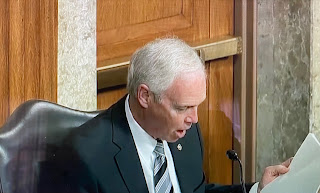 All of which are exacerbated by the federally-mandated rock-bottom hourly minimum wage of $7.25 which Republicans in Congress and Wisconsin have steadfastly refused to increase.

A bigger, more-informed picture about worker shortages can be found here:

“There are structural factors in our society that have brought us to this point where we have high numbers of unemployed still, especially among low-skilled workers, and now we have a burgeoning demand for qualified workers,” Wisconsin AFL-CIO president Stephanie Bloomingdale said. “To now complain that unemployed workers are getting $300 extra to get us through the pandemic — it falls short.”

But Johnson and other Republicans prefer tossing out resentment-building talking points to trigger donations and votes rather than actually doing anything about income inequality, systematic racism and persistent sexism which all have embedded and expanded America's underclass seemingly forever.

One positive note: Johnson should find himself with a little more productive couch time for a week because Google's YouTube business suspended his account for spreading misinformation.

Bottom line: intellectual, arrogant laziness that spreads ideology over facts can get you suspended from a private-sector social media platform; a staffed-up US Senator with free and instant access to facts should know and do better.