we all got even more welcome news:

The U.S. Environmental Protection Agency is expanding the list of areas that will need to meet federal smog regulations along Lake Michigan in Wisconsin. The revised air quality designations are a win for environmental groups, but the state’s largest business lobby argues the move will harm economic development.

The revisions are the result of legal challenges to the agency’s 2018 list of areas that weren’t meeting tougher standards for ozone pollution or smog that were put in place by the Obama administration in 2015.

Clean Wisconsin was among environmental groups who sued the EPA over a pared-down list of areas that weren’t meeting those standards. As part of a federal court ruling last July, the EPA reviewed designations impacting 16 counties in seven states that included Indiana, Illinois and Wisconsin. 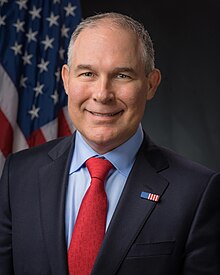 took time away from his other priorities, like obtaining a used mattress from a certain DC hotel, to hand Scott Walker the win for dirtier air he needed so Foxconn could legally belch out the air pollution tonnage that Walker's DNR had quickly legalized:

The DNR waited a whole eight days after the comment period closed to approve all four, very detailed air emission permits for Foxconn:

Foxconn is applying for at least four permits to emit large tonnages of air pollutants annually.

Those emission have been compared to the operation of a large paper mill, and the state is busy trying to weaken air quality standards and monitoring in the area.

Side note: After Pruitt's fixation on a mattress connected to The Former guy, and then the goofier and longer-lasting allegiance show by the MyPillow guy, I am compelled to ask:

Why does The Strongman of Mar-a-Lago attract such strange bedfellows?

Anyway - the DNR's award of those permits and its separate, fast-tracked grant of a Lake Michigan water diversion for production of big glass panels Foxconn now says it no longer will manufacture at its Mt. Pleasant facility should also be reviewed and withdrawn by the agency.

The sacrifice of environmental principles to get billions of dollars in public subsidies approved for Foxconn stunk from the beginning, like the political and financial shenanigans that gave the entire debacle life; the DNR's permitting 'process' for Foxconn set precedents which need to be fully exposed, then overturned, so they cannot be cited or duplicated later.

A Foxconn archive begun four years ago and updated continuously is here.

The scandalous, abusive trade of public health and clean air for profit-driven air pollution when we know how big the impacts will be makes for a case study of the dangerous breadth of special-interest governance.

It also shows - as do the refusal of Walker's hand-picked Natural Resources Board chairman to step down after his term has ended and the lingering power of the GOP's gerrymandered legislators swept into office on Walker's tea party coattails - that much of Walker's literally toxic legacy remains in place even though he was defeated in 2018:

...in a mirror of the 2018 lame duck session in which legislative Republicans took power away from the incoming Democratic governor and attorney general, the state’s Republicans are finding ways to thwart the will of Wisconsin voters more than three years after Walker was voted out. (Wisconsin governors serve a four year term.)

“You’ve got what is essentially a coup to maintain the last governor’s control of the board, they’re basically stealing power,” Jeff Mandell, co-founder of progressive legal outfit Law Forward, says. “They’ve found sort of a back door way to perpetuate the legacy, power and policies of Gov. Walker — who the voters chose to get rid of.”