You hear it all the time:"Follow the science."

We constantly say that science needs to be at the heart of public policy.

Which makes total ethical and practical sense when it comes to fighting climate change, or ensuring clean air and safe drinking water.

Because our health, our very survival is at stake.

But making science the core of state-sanctioned wolf-killing is a really big, contradictory ask.

Because special 'sporting' interests have long had the inside track that makes snared legs, head shots, wolf trophy collection and their packs' decimation the science-obliterating public policy outcome.

And in no way conserves the species, let alone suggests wolves have any larger value to people beyond Wisconsin's indigenous tribes:

We understand wolves to be our educators, teaching us about hunting and working together in extended family units. Wolves exemplify perseverance, guardianship, intelligence, and wisdom.

Moreover, in the Anishinaabe creation story, we are taught that Ma’iingan is a brother to the Original Man. The two traveled together throughout the earth naming everything. Once this task was completed, the Creator said that the two had to take separate paths, but indicated that whatever happened to one would happen to the other. Each would be feared, respected, and misunderstood by the people who would later join them on earth.

Thus the health and survival of Anishinaabe people is tied to that of Ma’iingan. We can do no less than to fully support efforts to protect and promote acceptance and to ensure healthy and abundant populations of wolves–it is our future we are also considering…”

The ugly reality of Wisconsin's official wolf policy was plainly shown to the world during the cavalier, bloody and politicized 2020 'hunt' when Wisconsin authorities threw science, their own kill quotas, fair chase standards and other best practices out the door as they also did in earlier wolf killing seasons, too.

So here is a simple, doable baby step that the DNR could take to bring science and public service back into the matter by incorporating wolves as part of solutions, and not defining and treating them solely as the problem.

By inserting into the discussion and policy-making intentional myth-busting education that explains and implements the positive, natural role wolves can play in culling diseased deer from the state's herd.

Who would oppose the state more effectively confronting the continuing spread of chronic wasting deer disease (CWD) by using wolves as "nature's first responders" to the deadly deer disease? 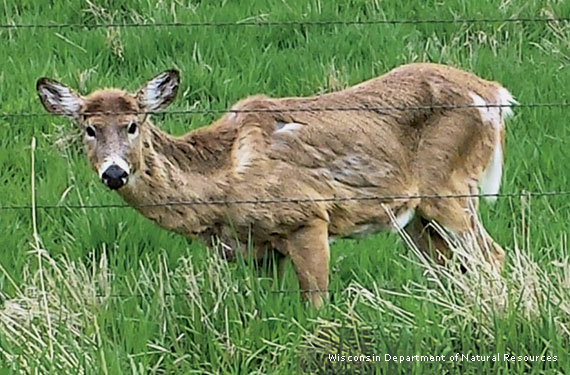 Focusing on wolves' value as natural CWD fighters and and also as a key contributor to the overall health of the forest would give the DNR reason to reiterate its own findings - I'd enumerated them in a 2013 web posting here - that showed wolves do not markedly reduce the overall integrity of the herd, as some hunters mistakenly believe:

According to the Wisconsin DNR, "Each wolf kills about 20 deer per year. Multiply this by the number of wolves found in Wisconsin in recent years (630), and approximately 13,000 deer may be consumed by wolves annually.

This compares to over 40,000 deer hit by cars each year, and about 450,000 deer shot annually by hunters statewide.

Wolves are a factor in the deer herd, but only one of many factors that affects the total number of deer on the landscape."

And a DNR publication discussing research to begin in 2010 also threw cold water on the notion that wolves take deer from hunters:

Some hunters argue an expanded wolf population, in particular, has resulted in fewer deer in the northern and central forests.

Review of published research and preliminary data analysis suggests bears are having a small but measurable impact on fawn mortality and that wolves have a small impact on the mortality rate of adult does.

And you will see the same belief again debunked during a discussion of DNR research recorded at the agency's Wolf Management advisory committee's most recent meeting in Wausau, on July 18.

This is important because many hunters miss that point.

Among hunters who applied for 2020 Wisconsin wolf killing permits, 42.4% - the largest number by far - chose this statement as their top reason among 10 choices for their permit application:

"I wanted to reduce the wolf population impact on deer and other animals," according to survey data shared by the DNR at its Wednesday wolf advisory committee meeting.

So the DNR can focus research on the deer-wolf relationship and also expand and sharpen its brief, repeatedly-qualified and cautious language on the matter which the agency has included in a web-based wolf information Q & A:

The relationship between wolves and deer is complex. Generally, winter weather and human harvest, especially antlerless harvest, have greater impacts on deer populations than predation over the long term. Deer herds in northern Wisconsin have increased significantly in recent years, even with an established wolf population, suggesting that wolves do not limit deer population growth. However, deer may alter their behavior, movements and/or habitat use in response to the presence of wolves.

Wolves are skilled at identifying vulnerable prey, and tend to target individuals that are old, young, sick or otherwise weakened. Hence, deer removed by wolves are less likely to survive and less likely to produce offspring than the deer that remain. The average age of white-tailed deer killed by wolves was 6.5 years in Minnesota, for example, whereas the average age of does taken by hunters was 2.5 years in this same area. This targeting of vulnerable animals serves to reduce the impact of wolves on long-term deer population dynamics. It has also been suggested that wolves might reduce CWD transmission rates and prevalence by removing sick individuals.

An interesting and more detailed article on the relationship between deer hunting and wolves was published by a Minnesota biologist in 2009.

In other words, the DNR can strengthen its commitment to good science, and to useful, accurate public education and perception.

Luckily, the agency can make use of the work of Wisconsin Greenfire, the non-partisan group of Wisconsin experts and scientists, which recently released a report -

Creating A Shared Vision for Wolves in Wisconsin

- that provides facts and directions that can be integrated into state wolf policy.

There are ways to actively bring science into DNR policy-making.

We'll see if the agency has the will to do it.

But you must understand, the concepts of "science" and "education" are simply not in the Republican's lexicon. You might as well try to explain it to a chimp. In the end they may smile at you, but ultimately there is no comprehension.

Living in wolf country, I believe some sort of wolf hunt is going to happen. BUT
1. Prohibit the use of dogs.
2. Prohibit night hunting.
3. Tighten/restrict trapping ability.
4. Prohibit electronic calls.
5. Require in-person, tagged registration for each wolf kill within 24 hours by a state wild-life professional.
I personally find the current wolf hunt both extremely un-sportsman-like and lacking any scientific basis.