Remember: of these two little dictators, Vos is running for re-election, Fitzgerald is running for Congress and both want with the help of their State Supreme Court allies to wrest Covid-19 policy-making from the Governor.

Defeat, recall and fire them both. 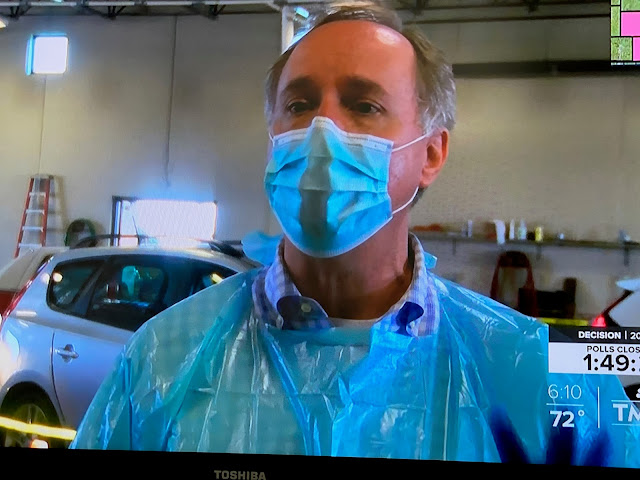 And Burlington, Vos' hometown gets 5 days of COVID testing courtesy of the National Guard. I can't decide if this is an olive branch or the if Evers administration wants to drive home how many cases there are in Vos' back yard. I believe the rate of infection in that area is higher than in Madison but slightly lower than in Milwaukee. I have heard rumors people down there aren't staying home or distancing.

If these guys weren't up for re-election in 6 months, I'd say they'd face recall. But instead kick their backsides in November. Especially Fitz, who might be the one Republican who could lose that Congressional seat (and I don't know why some other GOP hasn't challenged him in the primary - they'd likely win). What a bunch of lazy bums.

By the way, Racine County is in the top 5 for cases and deaths in the state. That's conveniently not mentioned by Robbin' and company when he tries to pawn off COVID 19 as a "Milwaukee" problem.

In seriousness, Madison should open before most places, as Dane County is out of the top 10 for cases, and has a positive test rate of around 4%. As usual, if the rest of the state was acting like Madison, we'd have a lot fewer problems.

Door #2, is a winner!!!
They had a couple thousand person rally in Burlington last weekend. Plotting their strategy of revolution. They network better than the rest of us. Make sure you vote. We need those seats.

Madison is on lockdown until July 15, Its the school

It is not a lockdown. It is a State of Emwrgency allowing for the County to get aid out quicker. I'm able to go to stores or other places as I want. But it shouldn't be unnecessary.

"I had people that were approaching us when we were together as a family, swearing at us, commenting to my wife," Prailes said in an interview. "I don't want to say too much. I just think that people made very personal and ugly attacks towards me and my family either through walking up to me or yelling at me or through social media....

"I understand people are stressed because of the virus and not sure exactly how to react," Vos wrote. "Sending someone dog poop in the mail (as was done to me yesterday) is pretty sad.

Sending someone dog poop in the mail is juvenile, disgusting and probably criminal. It's completely unsupportable. People have got to be better than that.

Y is the USA and UK not bothered,about the COVID deaths ?

Could it be that they want it ? Who are the dead ? The dead are the pensioners,and the persons,who are fatally sick.dindooohindoo

Assuming that these persons,had a residual life of 15 years,and we can assume that,by August,2020,there will be around 600000 dead in the West.

One could argue that the US Fed just printed,the USD 12 Billion - but now it need not.The Youth in the west,had to work at high rates of tax and deductions - to finance the aged pension and health care benefits - which ultimately,led to outsourcing.

The scam would be shocking,if the dead,had no insurance ! That would be telling ! If 6,00,000 are dead,with insurance and an average insurance claim,of USD 1,00,000 - then you have a bomb - to wipe out the insurers.

If 10 million die - we are looking at net savings of USD 200 billion per annum and USD 3 Trillion over 15 years.This will also solve the health insurance problems in the US/EU,as the high claim insurers,will cease to exist - and thus lower the insurance costs,for the young,and the cost of labour in manufacturing.

Large number of services and industries,in the west,will die out.That will release labour and reprice resources and rents - to drastically lower costs - and that will make,"Make in USA",viable

How will the state finance the loss of tax revenue and GDP.Ultimately,the state will have to demonetise the deposits, in banks, of the westerners.Simple ! The USA will not be able to demonetise the PRC holdings of US T-bills - not even if the PRC sinks a US aircraft carrier in the South China Sea.

All the nations who borrowed loans from PRC - will now force the PRC to do debt write offs.That will be a huge loss to the PRC,after the manufacturing shift from PRC to West.If 200 million people are unemployed in PRC - then you have Tiananmen - Part 2.

Of Course,the PRC could also force the IMF and the WB,to waive loans - but the harm to the PRC,will be done 1st.

Trump postpones the US Polls,as people cannot stand in queues and no electioneering is possible - and he has the cure - and by September,the pensioners are dead - death rate and infections rates drops ..... who is the gainer ? If Trump is winning - Putin will stay calm - else,he might attack Eastern EU.If Trump is winning - then it will be the last chance for PRC to annex Taiwan and Vietnam - and make Trump lose face. But the odds of PRC action is medium.

The West has to take a BIG PICTURE view.South East Asia and Indian and Nepal ,are over populated,and there is no humanity there.There is no sentience,in the "so called humans".They are robots - and 80% of them,have to die.Their time is over - they are obsolete, a dead weight,and a burden on earth.This will de-price the resources sector,lower demand,and solve the environment problem,forever.

Africans have been exploited,for at least ,2000 years - and they deserve,many more chances.

There are 3 simple steps

Are the "so-called humans" - having a sentience - depending on their "individual and collective actions"
If not,then they are "robots"
It is time to "terminate the robots"