As you absorb this man's crude, intentional and ignorant insensitivity, remember this: 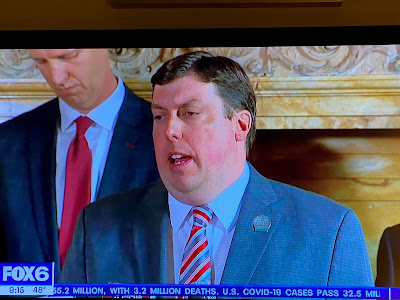 has risen above his previous and rightful State Capitol anonymity only because GOP Assembly Speaker and fellow minority dismisser Robin Vos installed Born as co-chairman of the powerful Joint Finance Committee - where decisions of a just a handful of state's 132 legislators can turn the whims and bigoted biases of the committee and Legislature's gerrymandered GOP majority into public policy:

MADISON, Wis. — Wisconsin Senate Republicans voted 18-12 Tuesday to pass a resolution honoring Rush Limbaugh, the divisive conservative commentator and radio host who died February 17.... In the same Senate session, Republicans turned down Democratic efforts to include slavery and Black history in a bill requiring public schools to teach the Holocaust and other genocides; they also rejected another attempt at a Black History Month resolution after passing on a similar effort last month.

Another example: stripping crucial public health funding for lead pipe replacement from the state budget because too much money was targeted for Milwaukee where the largest number lead pipes in the state serve a majority city population of color; perhaps Born could have a section of that toxic piping added to the temporary display in a Capitol hallway he said adequately represents African-American history in Wisconsin:

...he referenced the Capitol exhibit: "I think if you want to look at just Black history, you can stop by third floor East (wing) and see a Black history display that's in the case there...."

So when you see and hear Born you must also hear and see Vos, because Born would still be just another Capitol cookie-cutter fool if not for the promotion to power Vos thought Born had earned and deserved.