Time for some fact-checking as the 2020 election season closes out and 2022 is already in the news. 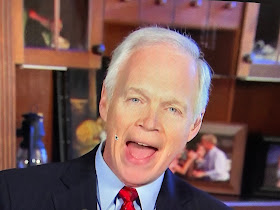 told a local Baraboo, WI paper in 2016 that he would not run for a third term, the Capital Times reprinted it, and so did the nationally-available publication The Hill with attribution:

The Wisconsin Republican told the Baraboo News Republic that the 2016 battle would be his final Senate election fight and that he would not run for a potential third term.

The announcement — confirmed by Johnson's campaign — potentially sets up an open seat in 2022 in Wisconsin, if Johnson can win his current rematch election against former Sen. Russ Feingold (D) next month.

Johnson, of Oshkosh, has not said whether he will seek a third term.-

- when Johnson sat in the Baraboo paper's office and pledged not to run again?

Republican U.S. Sen. Ron Johnson said Thursday if he wins re-election over challenger Russ Feingold in November, he would step down at the end of his second term....

Johnson said he is driven by a desire to use his knowledge as an accountant and manufacturing business owner to fix issues facing the state and nation, not to seek reelection. He made the comments during an interview at the Baraboo News Republic office before traveling to Reedsburg to speak with supporters.

Update - this information was added to the story:

Johnson was first elected in 2010. Initially, he said he would serve only two terms but last year he said he hadn’t decided whether to run for re-election, run for governor or get out of politics entirely.