Walker milks the manure runoff issue, iron mine player, too

[Updated from 1/8/17] A few days I said that Wisconsin's rightwing GOP Gov. Scott Walker, having done everything possible to drain state law, pollution enforcement and the Wisconsin DNR of science staff, funding, mission and public service environmental protection, would suddenly become the water governor because groundwater pollution on his watch was threatening his 2018 re-election in the very rural counties which supply him and the GOP with critical votes.

I put it this way: 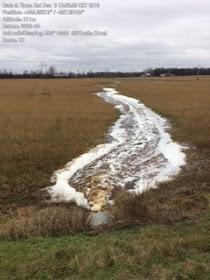 Though he has thumbed his official nose for 5+ years at his US Clean Water Law obligations, has overseen a statewide reduction in pollution inspections and enforcement, and has carried water (sorry) for whichever wetlands and water abusers needed an official shoulder shrug or pass  - - whether sand mining companies, iron mining special interests, big ag, animal feeding and manure producing operations - -

GOP Gov. Scott Walker has just signaled he will keep trying to fool all of the people all of the time by stealing the very issue - - clean water for everyone - - which should disqualify him from further public service to keep his inevitable 2018 re-election campaign afloat.

Sure enough, here comes a newly-energized Walker, apparently over his failed presidential campaign funk, full of initiatives and promises of state subsidies to appear interested in fixing well water contamination problems he and the Legislature and a complaint Attorney General have persistently ignored, enabled and aggravated.

As Lee Bergquist at the Journal Sentinel explains today:


Faced with mounting criticism over pollution problems from cow manure, Gov. Scott Walker's administration is turning to a private initiative as a remedy to treat massive quantities of animal waste.

State officials could spend up to $20 million in subsidies for systems to clean up manure and harness the waste as a source of natural gas.

I  would add that constructing many miles of piping to move the manure creates the opportunity for leaks and spills, that the Walker DNR has cut back on pollution inspection and enforcement, and the proposed scheme does not address the rapidly growing increase in big feeding capacities and herd size.

Nor, for that matter, does the Walker plan account for the possibility that treated manure through digester processing creates a separate set of issues and costs which also expand with the unchecked growth in animal feeding sites.

In his story, Bergquist also drops in this revealing gem about Walker's plan, and mindset and to whom he and his team continually rely upon.


"What we are trying to do is participate in a private investment to address a public issue,” said Bob Seitz, the No. 3 official at the PSC who is moving to the Department of Transportation as deputy secretary.

In case you have forgotten, Seitz has been a lobbyist for both a Koch brothers operation and the failed Gtac iron mine plan - - failed because it would would have overwhelmed an entire watershed for decades - - yet there he is again, not only talking up Walker as a water steward but look - - he's headed for another big Walker controlled job, at WisDOT - - where projects take land, produce contaminated runoff and serve the basic fossil fuel agenda that is central to Koch industries operations.

Be not fooled by this new Walker pose.